Globalisation in the Age of De-nationalised Comparative Advantage

Richard Edward Baldwin is Professor of International Economics at the
Graduate Institute, Geneva since 1991, Visiting Research Professor at
the University of Oxford from 2012, President of CEPR, London since June 2016, Director of CEPR, London (2014 to 2016). He is Senior Editor of Economic Policy since 2014 Founder and Editor-in-Chief of VoxEU.org since March 2006. He is member of the Advisory Committee of the Research Institute of Japan’s Ministry of Economy Trade and Industry since 2011 and member of the World Economic Forum’s Global Agenda Council on Trade since Sep. 2009.
He was Vice Chair, Advisory Committee, Peterson Institute for
International Economics, Washington from 2008 to 2012, Policy Director of CEPR London, from 2006 to 2014, Scientific Committee, CEPII, Paris from 2005 to 2007 and Co-managing Editor of the journal Economic Policy from 2000 to 2006. He was a Senior Staff Economist for the President's Council of Economic Advisors in the Bush Administration (1990-1991) following Uruguay Round, NAFTA and EAI negotiations The author of numerous books and articles, his research interests include international trade, globalisation, regionalism, and European integration. Baldwin earned his PhD in economics from the Massachusetts Institute of Technology (MIT).

Registration form is available in the following page: https://goo.gl/forms/K7Jd93IJs2ZXsT5t1 (~12/9)
Language: English
Hosted by the Institute for Economic Studies and the Faculty of Economics, Keio University
For further information, email : ies-office@adst.keio.ac.jp
(03-5418-6433) 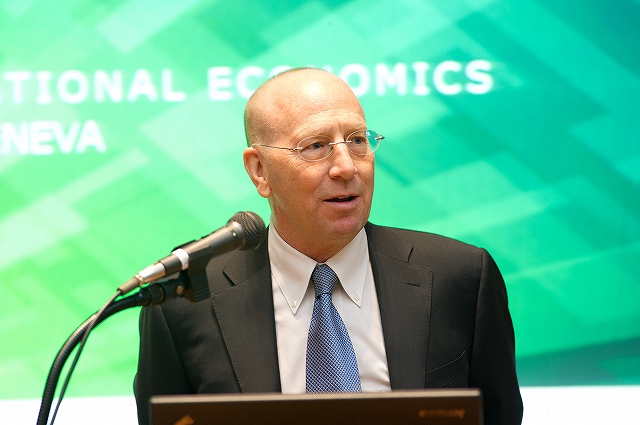 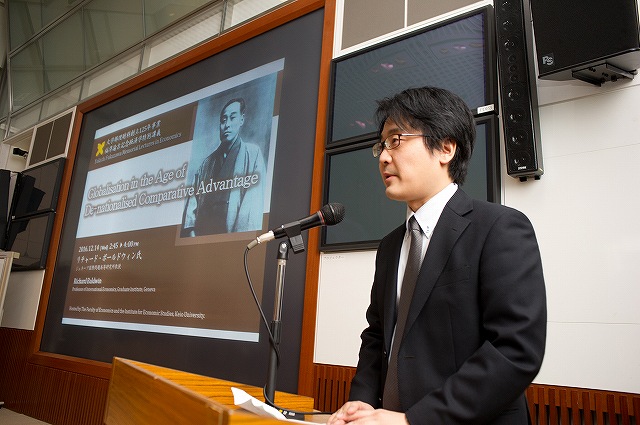 On December 14th, 2016, the Institute for Economic Studies and the Faculty of Economics at Keio University invited Professor Richard E. Baldwin, Professor of International Economics of Graduate Institute Geneva (Switzerland). The special lecture was sponsored by the Yukichi Fukuzawa Memorial Foundation. Professor Richard E. Baldwin gave a special lecture under the title of “Globalisation in the Age of De-nationalised Comparative Advantage” at G-Sec Lab in the East Gate Building (6th floor). 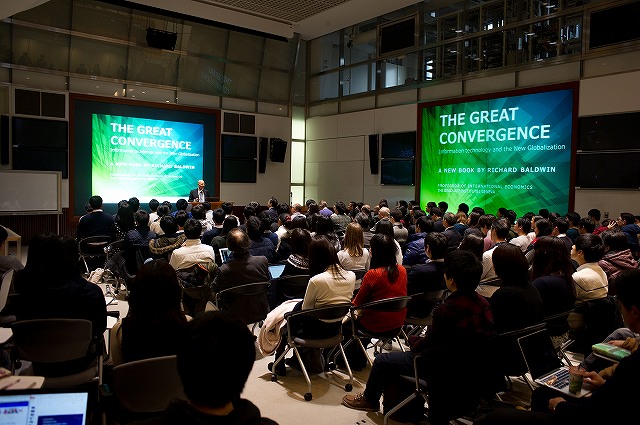 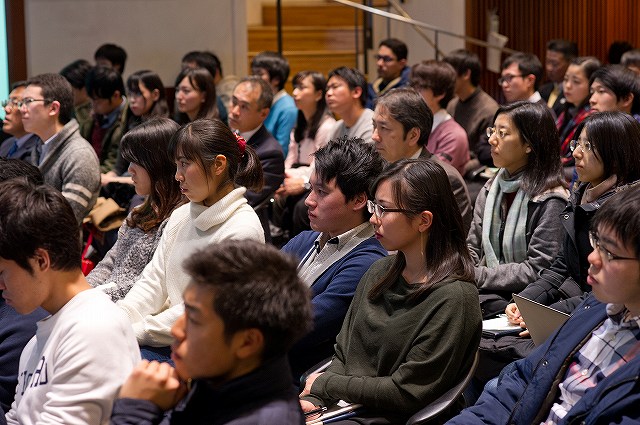 His special lecture gathered more than 150 undergrad and graduate students who are mainly specialized in international economics as well as many researchers in international trade and macroeconomics. The lecture room was filled with them. 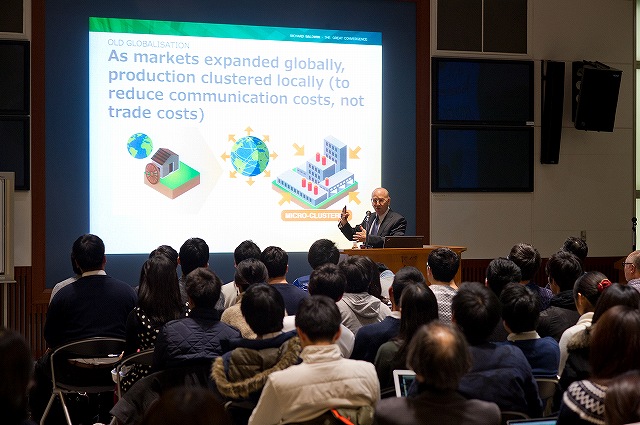 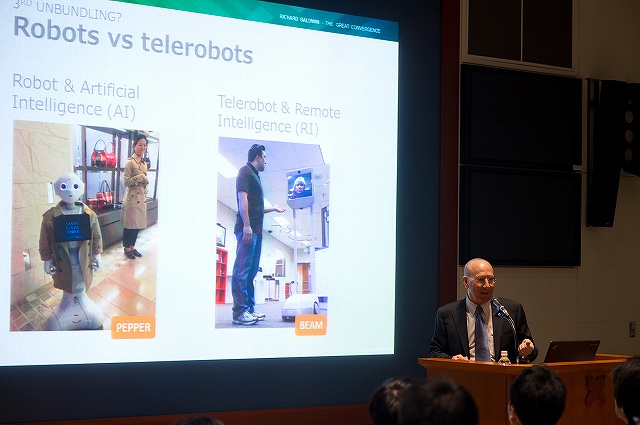 His special lecture was based on his currently published book “The Great Convergence”. He first overviewed economic growth in the long-run period. Since the Industrial Revolution, many developed countries have grown their economy at very high speed, while many developing countries have been in stagnant with low economic growth. The world economy sees “the Great Divergence”. However, a drastic change happened in the 1990s, “the Great Convergence”. China and India grew up rapidly. By contrast, developed countries such as US and Japan struggle in recessions and offshoring. The middle income countries catch up to the developed countries. According to Professor Baldwin, the development of ICT results in Globalisation’s second unbundling, in which production process and task are geographically diversified across nations. 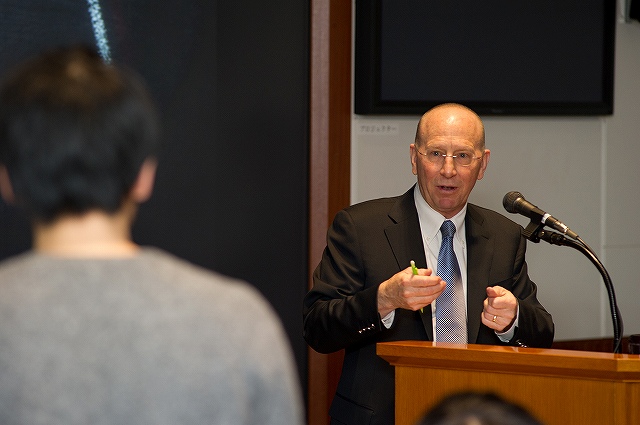 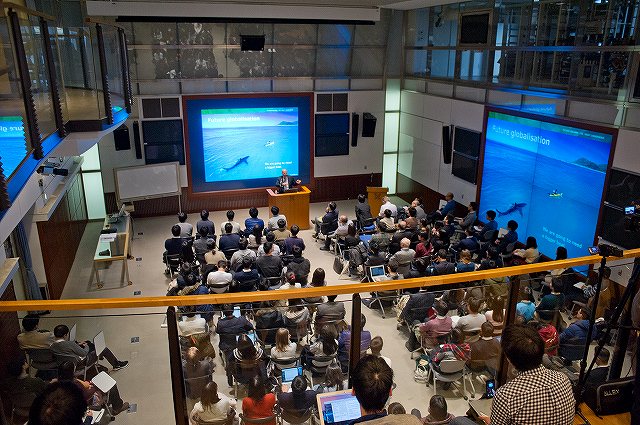 He provides the audiences with clear explanations without any mathematical models and econometrics. His special lecture gives us a big picture on globalization with many implications and intuitions. Many students asked many questions after his presentation.