Speech "Growth in the Eurozone" by Mr. Jeroen Dijsselbloem

Faculty of Economics and Institute for Economic Studies, Keio University

Mr. Jeroen Dijsselbloem, Minister of Finance of the Kingdom of the Netherlands, President of the Eurogroup, and President of the Board of Governors of the European Stability Mechanism. His speech will be held as a part of the “Keio Security Initiative” for the 2014 Top Global University Project supported by the Ministry of Education, Culture, Sports, Science and Technology.

In 1992 Jeroen Dijsselbloem worked as an assistant to the Dutch Labour Party (PvdA) Members of the European Parliament in Brussels. He joined the staff of the parliamentary PvdA in The Hague in 1993, where he worked for three years as a policy officer in the area of spatial planning (including the environment, agriculture and nature). Jeroen Dijsselbloem sat on the Wageningen municipal council from 1994 to 1997. In 1996, he became an advisor to the Minister of Agriculture, Nature Management and Fisheries in The Hague, a position he held for two years. He was then appointed deputy head of that ministry’s advisory section, where he remained until 2000. Jeroen Dijsselbloem was a member of the House of Representatives from 28 March 2000 to 22 May 2002 and from 19 November 2002 until taking up his post as minister. He was the party’s spokesperson on education and youth and covered a broad range of other policy issues. From 25 April 2007 to 22 December 2008 he chaired the parliamentary investigation committee on educational reform. On 5 November 2012 Jeroen Dijsselbloem was appointed Minister of Finance in the Rutte-Asscher government. Jeroen Dijsselbloem has been a member of the PvdA since 1985. He became the deputy leader of the PvdA parliamentary party in 2008.

Hosts : Faculty of Economics and Institute for Economics, Keio University, Embassy of the Kingdom of the Netherlands, Keio International Center. 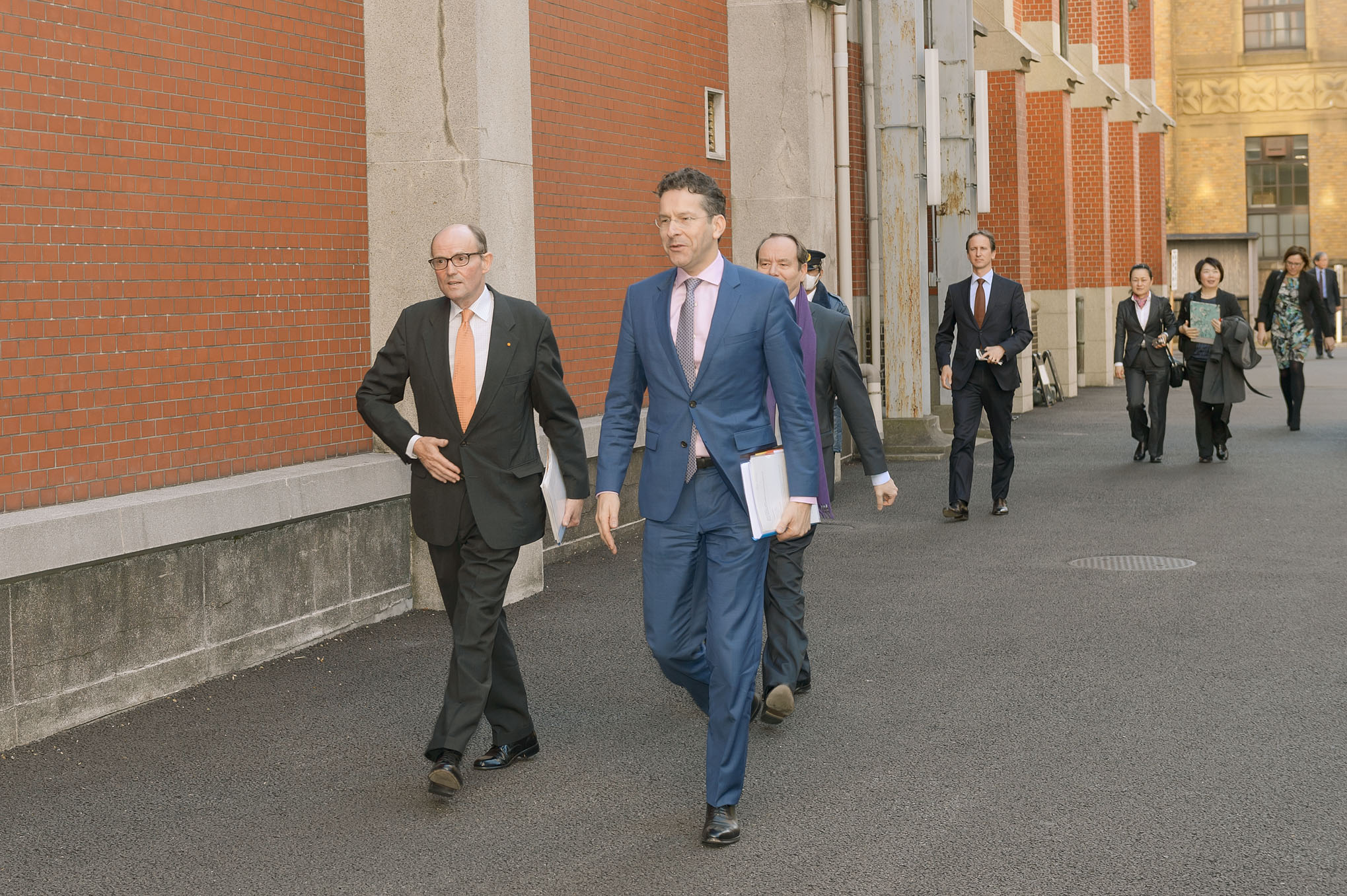 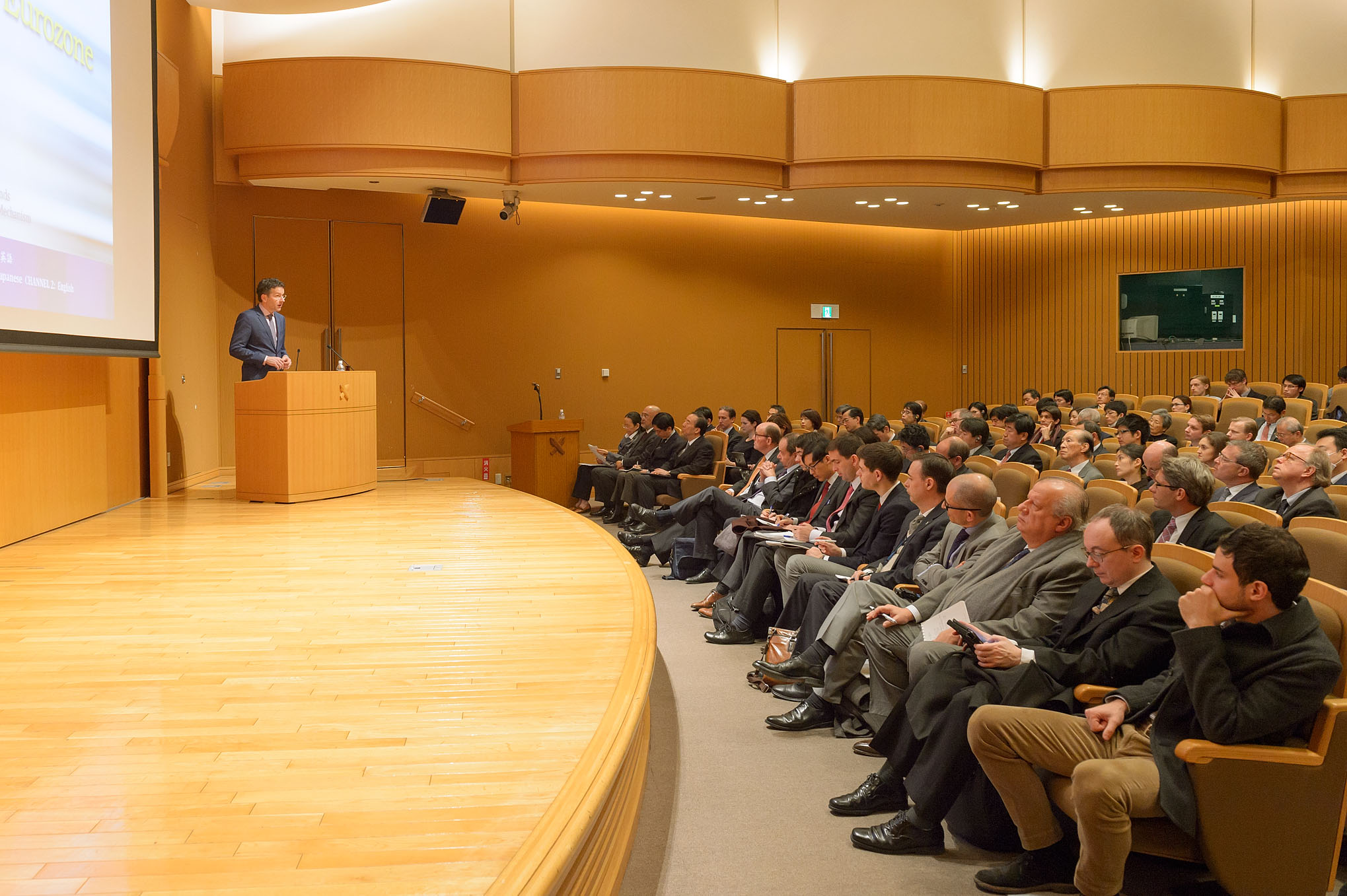 In the North Hall

Keio University invited Mr. Jeroen Dijsselbloem, the President of Eurogroup, Minister of Finance of the Kingdom of the Netherlands and the President of the Board of Governors of the European Stability Mechanism, to deliver a speech, “Growth in the Eurozone” as part of Keio University’s Security Initiative under the Top Global University Project. The event was co-hosted by Keio University’s Faculty of Economics and Institute for Economic Studies and the Embassy of the Kingdom of the Netherlands. It was held at the North Hall on Mita Campus on Tuesday, January 13. 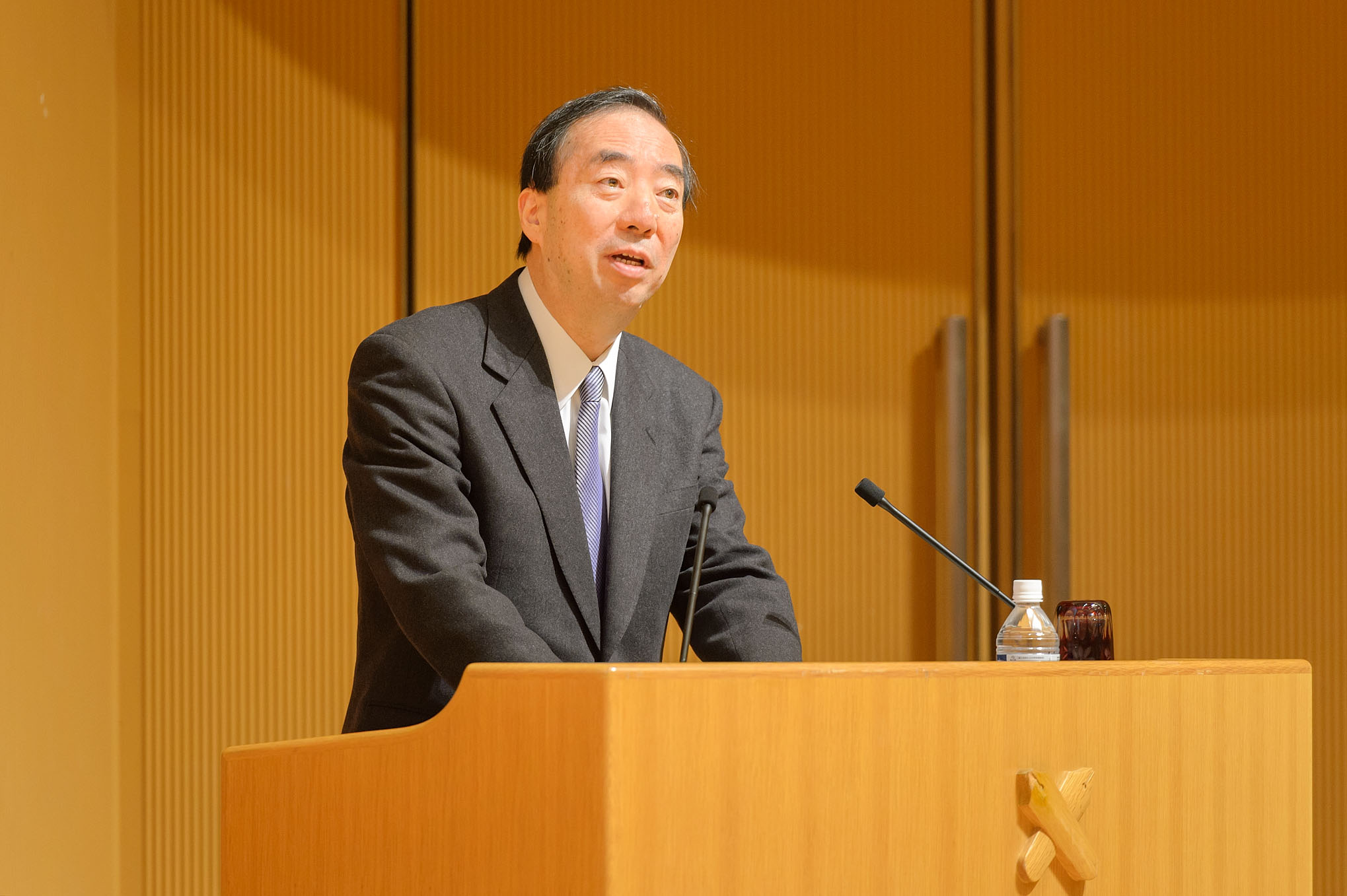 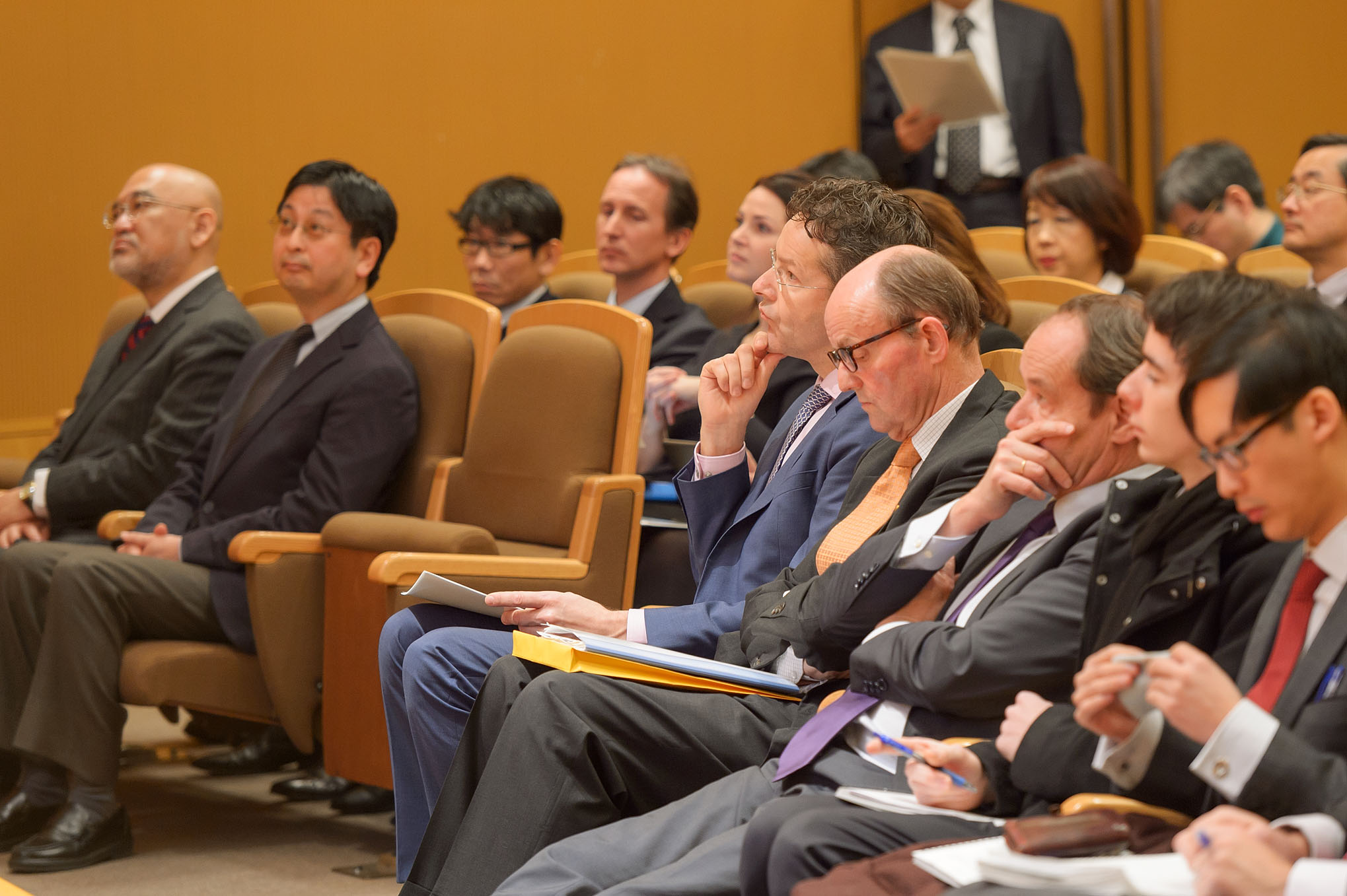 In the opening speech, President Seike acknowledged the fruitful and successful relationship the Netherlands and Keio University have enjoyed over the years. He also mentioned that risks related to population ageing, environmental pollution and security, as well as the need for innovation were common issues for European countries and Japan, and that Keio was extremely fortunate to have the opportunity to learn from Mr. Dijsselbloem’s insight. 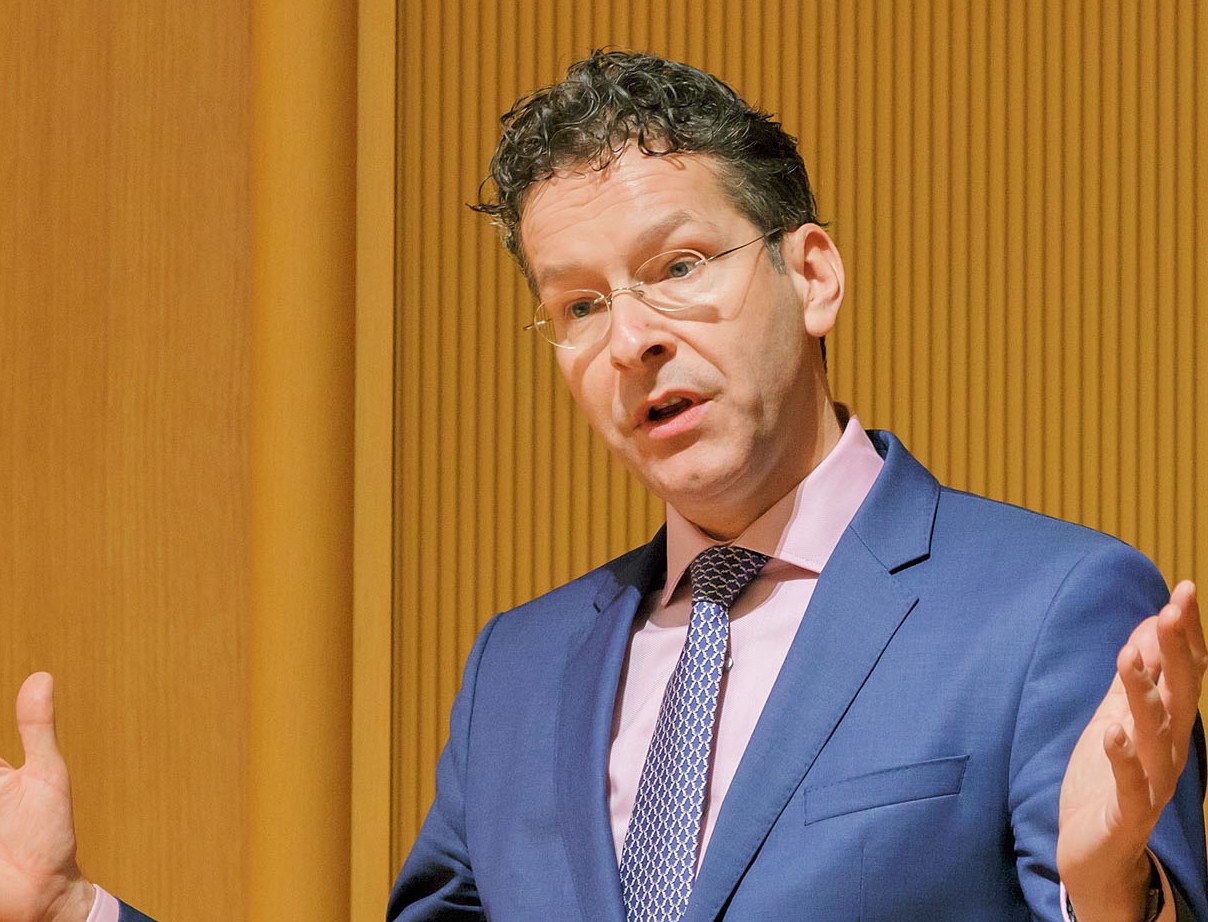 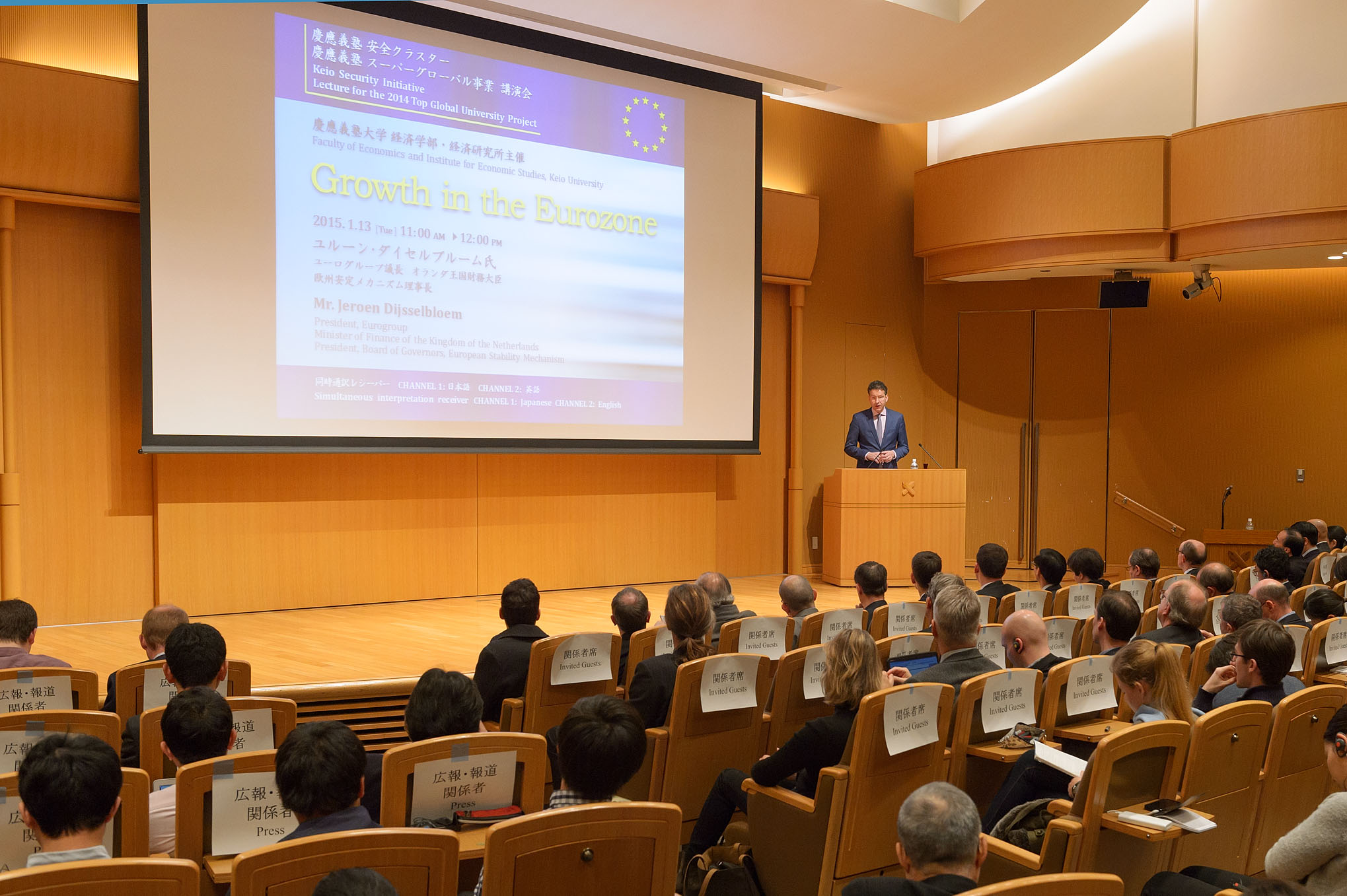 Mr. Dijsselbloem pointed out in his speech that change was needed in Europe in order to achieve sustainable growth, and that if Europe with its consumer market comprising 500 million people regained competitiveness, the benefits would be seen all over the world. He also talked about the creation of the Banking Union in Europe, and about the measures and reforms that the euro area countries swiftly undertook in order to get public finances back in order. He then went on to point out that even though Europe and Japan differed in their reaction to the crisis, they both shared the key challenges of investments leading to productivity improvement and growth, and further structural reforms.

Professor Sahoko Kaji, who chaired the lecture, asked Mr. Dijsselbloem what the role of democracy was in maintaining fiscal, demographic and environmental sustainability. In response, he commented that it was important for politicians to openly discuss the costs and benefits of policies with the public and gain understanding of the nation before pursuing policies. 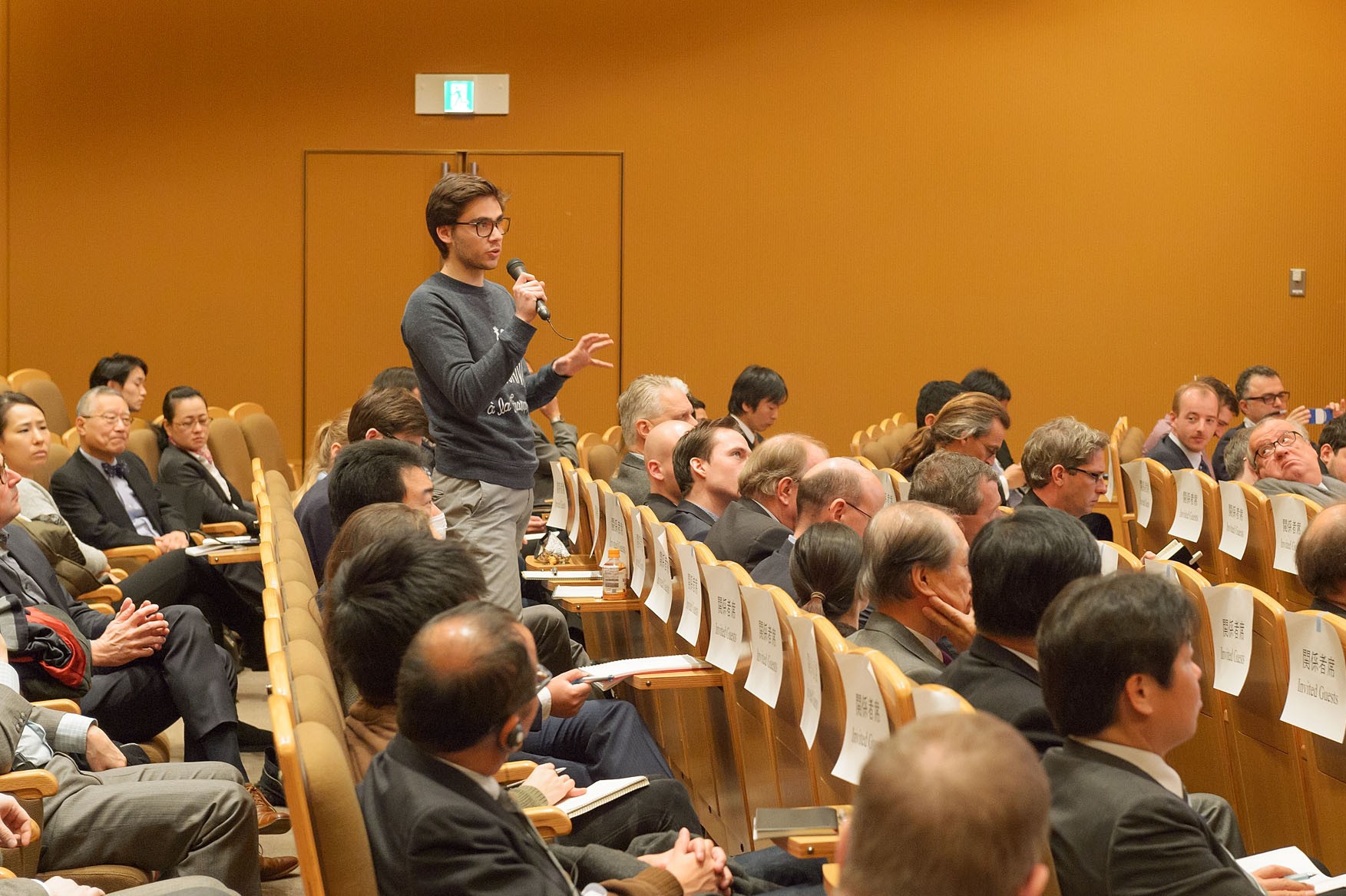 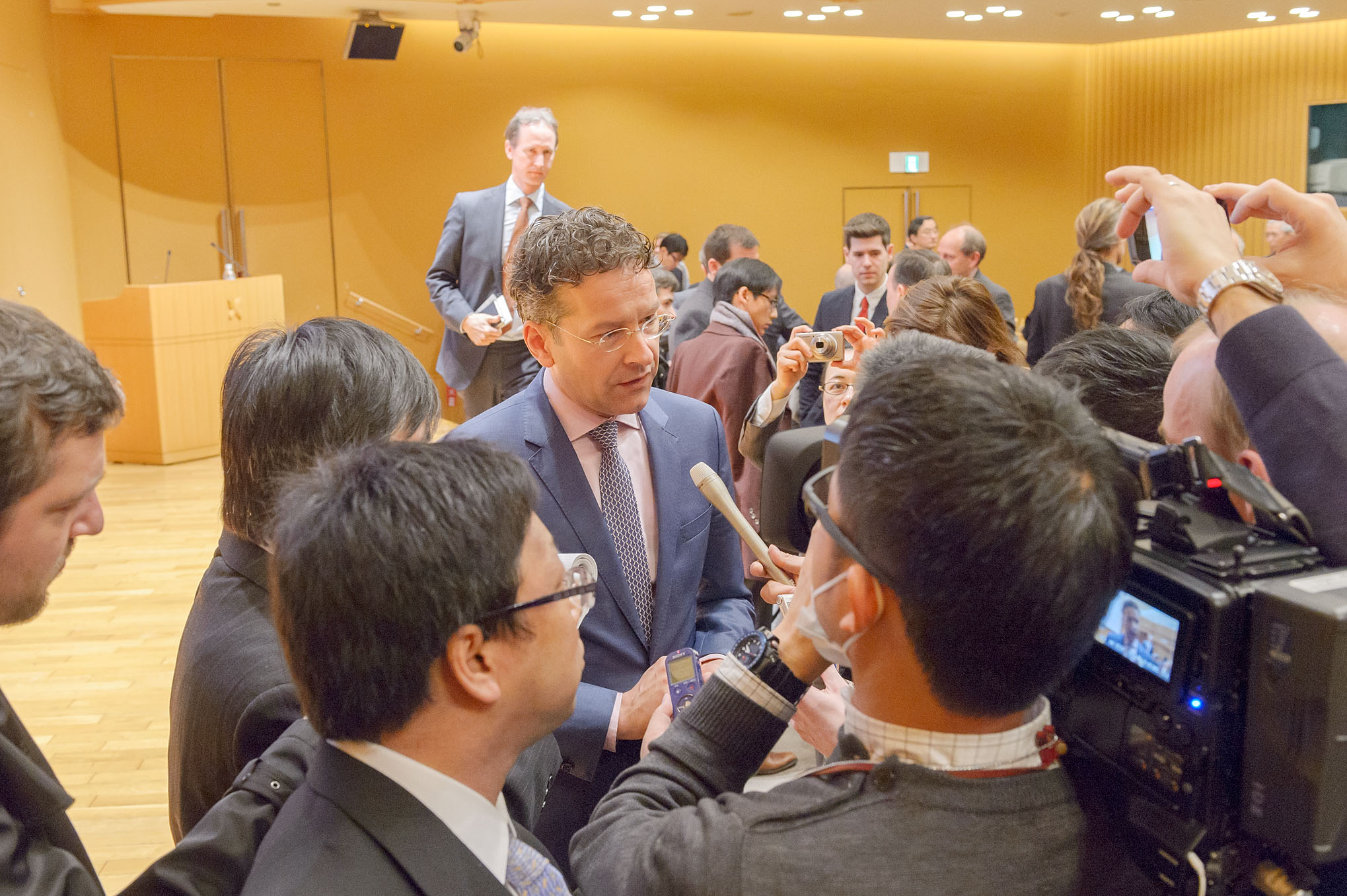 This was followed by a lively Q&A session where the audience including students addressed a number of questions, one of which was on public consensus and future policies in Greece.

The event was concluded with closing remarks by H.E. Mr. Radinck J. van Vollenhoven, Ambassador of the Kingdom of the Netherlands to Japan.